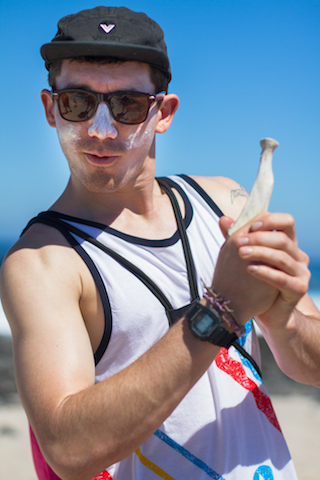 Born at the tender age of zero, he began his first migration towards the great Pacific Ocean. Forged by the rough shell sand and pounding temperate waves, he formed a deep connection with the sea and all of her creatures. Now he uses his powers to teach others how to form a deep and lasting relationship with our mother, Ocean.

In his terrestrial life, Thomas is most commonly spotted at the Ocean Safari headquarters answering calls, repairing equipment, orchestrating excursions, and signing autographs.

After hours he must travel to the nearest body of water to avoid desiccation, often spending his weekday evenings teaching scuba, free diving, and rescue diving at the Norman S. Johnson Aquatic Center in Arcadia.

When he is not “working” photography, music, surfing, and hiking are his go-to activities.

Though his powers are great and many, there are still countless migrations ahead.

Join Ocean Safari and view this majestic creature on your next underwater adventure.

Diving the Pacific Side of Baja California 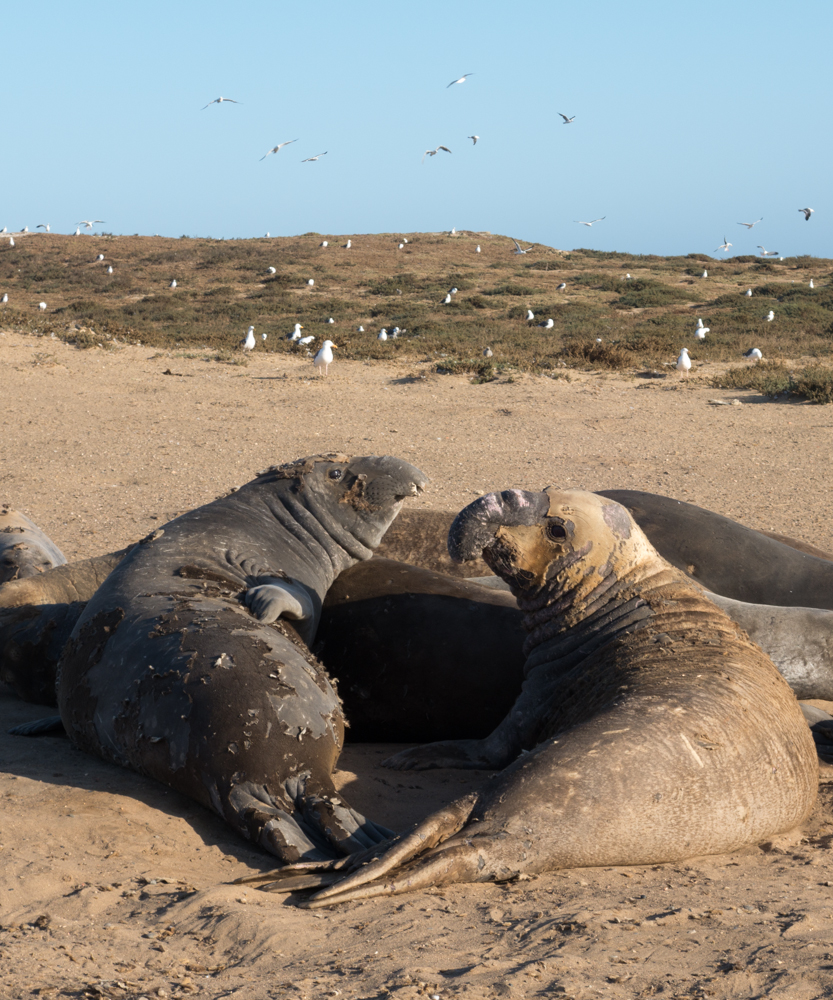 We came to Mexico to explore virgin pinnacles and coves of the Pacific side of Baja California,. We began in Cabo San Lucas by cooling off in the Sea of Cortez with hundreds of Mobula rays. These large groups are called Fevers. While we swam with the fever we enjoyed a lovely view of the famous arch just outside the marina. With the sun up and a water temperature of 79 F some of our group went in with just their shorts and rashguards. Our boat drivers would drop us off right in front of the swimming rays so that we could swim among them. They seemed to move very slowly, but were much faster than they looked! When we weren’t admiring them underwater we would watch them fly up to 10’ out of the water and slap their wings and body back down onto the surface. After about 2 hours of snorkeling we headed back to the marina to gather the rest of our belongings and head to our home for the next 10 days, the Nautilus Undersea Hunter.

Once we all boarded the vessel we were offered a cheese plate and sushi rolls as a late night snack. The galley and common area was very cozy with 2 big couches, and 2 big dinner booths. Our lead dive master, Sten greeted us and introduced a few other crew members to us while also filling us in on important boat details. Sten, who is a good friend of Gabriel sic Ocean Safari, and one of the most experienced divers familiar with Baja California. Along with him we have 2 more of the best dive masters in Baja California, Ivan and Ray. Each of them with over 20 years and thousands thousands diving experience. Due to the exploratory nature of this expedition, our schedule was not set in stone. We would start by sailing towards the most remote and difficult to reach destination on our agenda, Rocas Alijos. Through the night we motored north against the swell, which continued through the first day at sea. The total time to reach Rocas Alijos from Cabo San Lucas is roughly 34 hours. Due to the weather on the open ocean it wasn’t safe for snorkeling, so we spent our first 2 days preparing our equipment, doing yoga, cross fit, tai chi, laughing, and sharing stories with each other. Everyone was in a great mood because we knew we would be making it to the seldom seen, and even more seldom dived on, Rocas Alijos.

On the surface were three towering rocks spread out over a 200 yard area. The largest of them stood 110’ tall. Sten told us that many years ago rebreather guru, Jeff Bozanik, climbed to the top of the rock while they were here together on a dive trip. Today you can see some sort of weather station surrounded by many birds right at the top of the rock. Several of us were wondering what method was used to instal the weather station. Our questions were answered during our last few hours at the rocks when what appeared to be a Mexican Navy ship appeared on the horizon. She sent out a helicopter which hovered above the weather station and lowered 3 people down onto the rock. They did a great job and everyone enjoyed watching them work. Before we left we witnessed the erection of a shiny new Mexican flag.

Visibility underwater was at least 100’ and the water temperature was 70 Fahrenheit. The swell was about 4-7 feet, and the period was around 12 seconds. For our group of well seasoned, world traveling divers, the conditions were extremely enjoyable! We saw dozens and dozens of Galapagos sharks, and a myriad of different fish species. The topography underwater consisted of vast boulder fields with 100’ tall monoliths sprinkled all around. On one of our dives we found a beautiful arch covered in big schools of cortes sea chub and black jacks. For me, this was the most exciting dive at rocas alijos. We started diving the underwater arch at roughly 100’ and slowly followed the formation up to the surging shallows at the base of the south east rock. On the morning of our second day of diving at rocks alijos we found a dozen of flying fish who had gotten stuck on our swim step. Dive master Sten collected them and we used them as shark chum on our following dives. On one of our dives we saw at least 50 young Galapagos sharks. We all made many fond and exciting memories diving rocas alijos. We bid farewell to these 3 giants of the pacific ocean and headed back towards the mainland to our next destination, Isla San Benitos.

Isla San Benitos greeted us with amazing clear indigo waters. Water temperature here was around 65F and visibility was between 80-100’.  This is where we started to notice some familiar faces such as garibaldi, calico bass, and sheep head. There were also many new faces which we had not seen yet such as the guadalupe fur seals, sea turtles, and scythe butterflyfish. The terrain underwater was made up of scattered pinnacles covered in boulders and crevices which were abundant with marine life. The mild current and surge made the diving much more exciting and brought out all the fish. My fondest memory here was riding the surge on the exposed side of a large pinnacle and being visited by a curious guadalupe fur seal as we enjoyed the sunlight dancing over the rocks. Reluctantly we all said our goodbyes to Isla San Benitos and headed toward Isla Cedros.

Arriving at Cedros Island a bit later in the afternoon left us time for just one more dive before sunset. The water here had noticeably less visibility, but the temperature was still in the 60’s. The dive that we did here was shallow, with a maximum depth of 20’. The terrain was an expanse of jagged rocky reefs and boulders. Though we got here late in the afternoon the sun was still high in the sky, shining its light through the water and illuminated the green eel grass as it swayed hypnotically with the passing swell. We enjoyed the presence of dozens of horn sharks on this dive. I even observed one carrying its egg case through the eel grass, my assumption is that it was looking for a good place to place it while the baby inside develops into a shark. The scenery reminded me of diving at San Clemente Island, except that very very few people have ever dove where we dove at Isla Cedros.

The next Island in our path was Isla San Jeronimo. The diving here reminded me of Santa Rosa Island. The water was pretty chilly at a cool 53 F, and the water was a misty emerald. Despite the colder temperature and cooler water we enjoyed the beauty of diving in beautiful forests of giant kelp. There was an abundance of nudibranchs, sponges, and anemones as well. The terrain was very rocky and offered many canyons and nooks to explore. Near the surface we were lucky to swim with thousands of red pelagic tuna crabs.

After a couple dives we got back onto our pangas and headed for shore. A short hike on the island brought us to an old light house where we could gaze upon all of the surrounding shores of San Jeronimo. There were hundreds of roosting seagulls, wrens, and pelicans all over the ground. Above us were swirling masses of worried parents telling us to watch our steps as we hiked past their hatchlings to the other side of the island. At a small beach opposite of where we landed we had an excellent view of a colony of elephant seals. They didn’t seem to mind our gawking, but once in a while blew their noses into the dirt to let us know they noticed our presence.

Our last dives were at Isla San Martin. Though this Island was further north than Jeronimo, the temperature was significantly warmer at 58F. The color of the water was still that same misty green, but we had even more kelp here. Inside the kelp was like a beautiful cathedral where rays of sunlight penetrate the tiny gaps between the kelp canopy. There were about a dozen harbor seals curious following us everywhere we swam. While we were here we also saw a team of lobster divers hard at work.

Our journey from Cabo San Lucas had finally come to an end when we reached our port in Ensenada. The experiences that I shared with our divers and the crew were one of a kind, and left me wanting to come back for more. I am very grateful that we made it to such remote destinations like the fabled Rocas Alijos. I’m also grateful for having such fantastic company and food for the journey. In order for this trip to happen it took many years of planning, and a team of divers who were willing to try their luck at exploring the magnificent pacific coast of Baja California.

Please Note: This is a printout of the Ocean Safari Scuba | Community | Thomas Templar | Diving the Pacific Side of Baja California page from 06/04/2020. Some information may have been updated in the mean time. Please visit PAGE URL to view the latest up-to-date information or call us at 626-287-6283 if you have any questions.