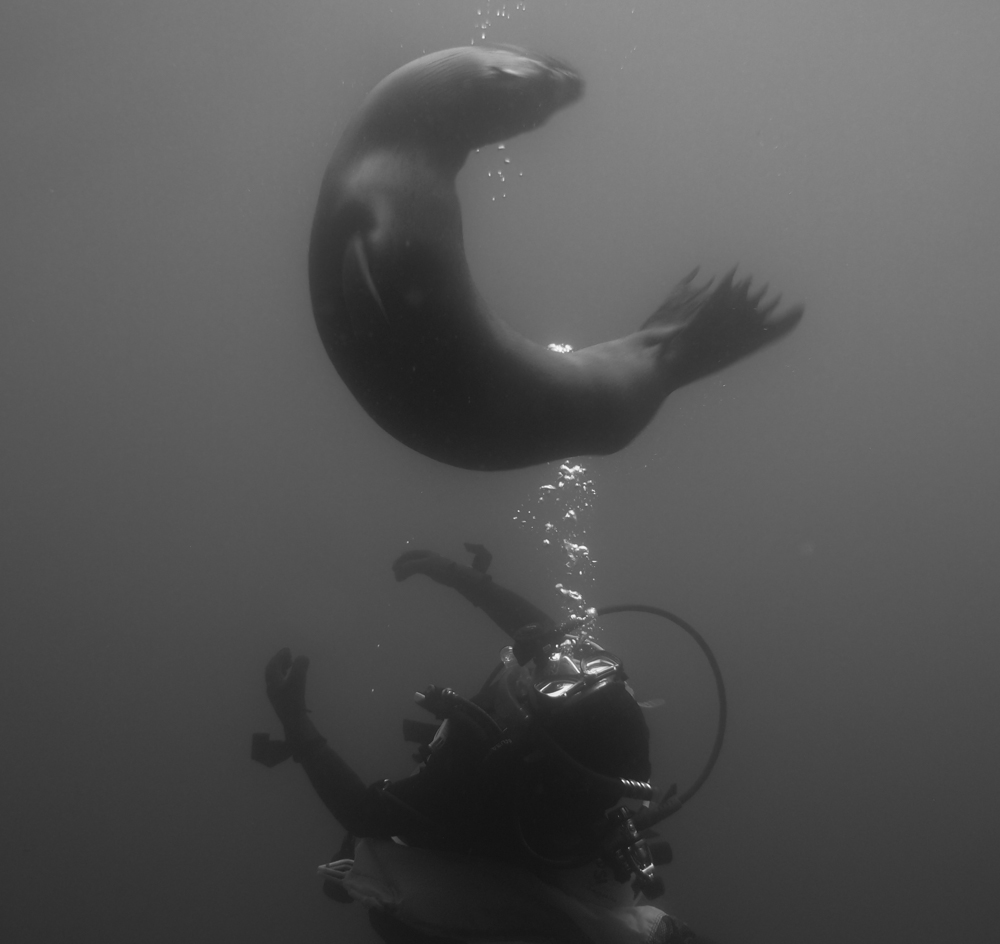 I started my diving career here at Ocean Safari at the age of 14, hoping to expand my perspective to encompass the underwater world, and what I've discovered for myself has well beyond exceded my expectations. Like most others who start scuba diving, I was drawn by the unknown and the desire to seek out beauty. I've always loved watching the documentaries on TV and I wanted to see, firsthand, what lies under the surface. It started with swimming and then traveling and snorkeling, but it wasn't enough. I wanted to see more, and what better way to explore the underwater world than scuba diving.

The day started bright and early as the bleary eyed divers arrived one by one at the shop to carpool down to San Pedro. Once at the dock, everyone was wide awake and ready for another day of diving. It was a cloudy day, but the gloom would not be enough to lessen our excitement. We didn’t know it at the time, but we were in for a treat.

As we headed out of the harbor, a marine layer hung in the air, covering our gear with small droplets of water, but the fog that was making the air just a bit colder, was actually a sign of the good conditions ahead. The hanging moisture meant that there was no wind to blow it away, ensuring a calm crossing to our first destination; Isthmus Reef

Isthmus Reef, is located on the front side of Catalina, just south west of Bird Rock. The location featured a shallow plateau that is overgrown with the invasive, but still quite nice to look at and fun to swim through, sargassum seaweed. For the experienced divers, a nice moderate swim will bring you to the edge of a beautiful 60 foot (ish) drop-off that would make for an amazing wall dive.

Our second and third dive were at the Quarry, located East of Blue Cavern Point on the front side of Catalina. The site is a marine protected area, meaning you can’t take shells and fish from the area, but on the bright side, you can really see how the marine life benefits from these regulations. The site was swarming with life, from the beautiful kelp suspended in the still waters, to the many fish that dart in and out of the labyrinth beneath the rocks. This is also the perfect spot to get a small taste of tropical colors. If you look between the crevices, you might just find one or two of the resident Scythe Butterfly fish, swimming around. It’s bright yellow and black markings, along with its two small horns, are bound to capture your attention. The Scythe Butterfly Fish is commonly found in the depths of southern tropical waters, but it is thought that these few individuals likely dispersed from their natural distribution due to an El Nino decades ago.

Climbing out of our second dive, there was a slight commotion as people gathered around the side of the boat to catch a glimpse of a fin cutting through the water. Those aboard the boat all stared at the fin in awe, as one individual decided to jump in, thinking the fin belonged to a giant Mola Mola, only to hurriedly scramble back onto the boat once he realized it could be something else. Was it a harmless sun fish, or a magnificent giant swimming at the top of the food chain? We will never know for sure, but the mystery just adds to the excitement.

We ended the diving day with another dive at the quarry. The water stayed calm and divers went down for a second look around, hoping to catch sight of anything they might have missed the first time.

After making sure all our divers made it back onto the boat, the bottom scratcher headed back towards mainland, ending yet another amazing trip to Catalina Island. 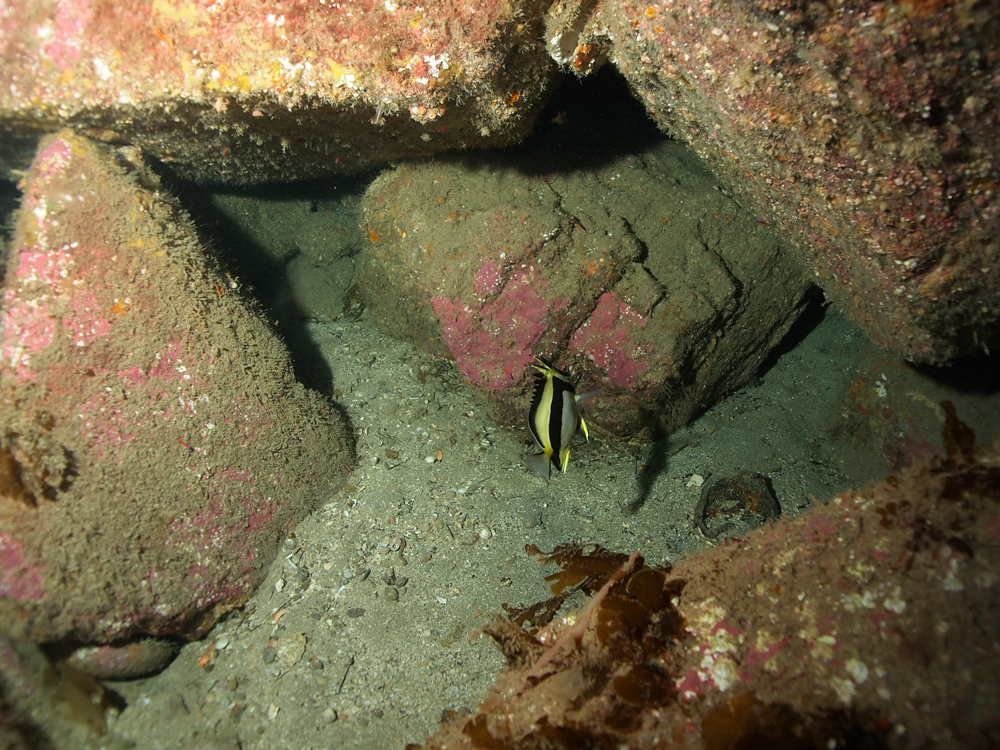 The day started bright and early.. okay maybe not bright, but it was early. While we were heading out to the dock in San Pedro to board the Bottom Scratcher (the boat comes with a story. Just ask Gabe ????), we encountered periodic showers, which then became a consistent downpour throughout the boat briefing and the departure. Despite the downpour, we were expecting a nice calm day at sea with ideal diving conditions, and while the rain may deter some, our group of excited divers were ready to take on the day of diving. In fact, the rain would be a special bonus during the trip. As we approached the dive site however, the rain subsided and the clouds parted into a beautiful calm day, but had the rain continued, the boat was fully equipped to keep our divers warm, dry, and comfortable in the large galley.

Our first location was a little north of Doctors Cove by table rock. There was so much to see and different options fit to accommodate all divers. The boat anchored over the sandy bottom and just a few yards away was a sailboat wreck ready to be explored. For the strong swimmers on board looking for a challenge, table rock was just a few hundred yards away, surrounded by kelp and teaming with life.

The second dive was at Eagle’s Nest, where a beautiful kelp forest awaits. You can weave in and out of the kelp at the edge of the reef, or drift into the kelp forest for a beautiful scenic dive. I crawled through the patches of algae (kelp) and in between rocks to find myself deep in the heart of this beautiful underwater ecosystem. I even got a welcomed visit from the local harbor seal!

Coming out of the second, the talented cook, Lauren, arranged a delicious lunch in the galley, ready for our hungry divers. The piping hot oven roasted beef brisket sat on the table next to some mashed potato and gravy, salad, and dinner rolls. Nothing but the best to rejuvenate divers before the final dive of the day.

With bellies full and the tanks filled and ready to go, we suited up and jumped in at the last site for the day; Indian Rock. As we approached the rock from underwater, we came upon the edge of the kelp forest where lots of fish were hanging around. The water was still and calm as we swam around checking all the nooks and crannies to see what wonderful creatures might be hiding.

Although we had finished our last dive, the day was not yet over. After roll call to make sure all our divers were onboard, Lauren brought out some fresh baked brownies to enjoy as we headed back to the dock. The crossings always holds opportunity for an encounter with dolphins and whales. Sure enough, as we were heading back, a school of dolphins accompanied us, playing in the boat’s wake. By this time, the sun was also setting, leaving beautiful colors dancing in the ripples behind us. 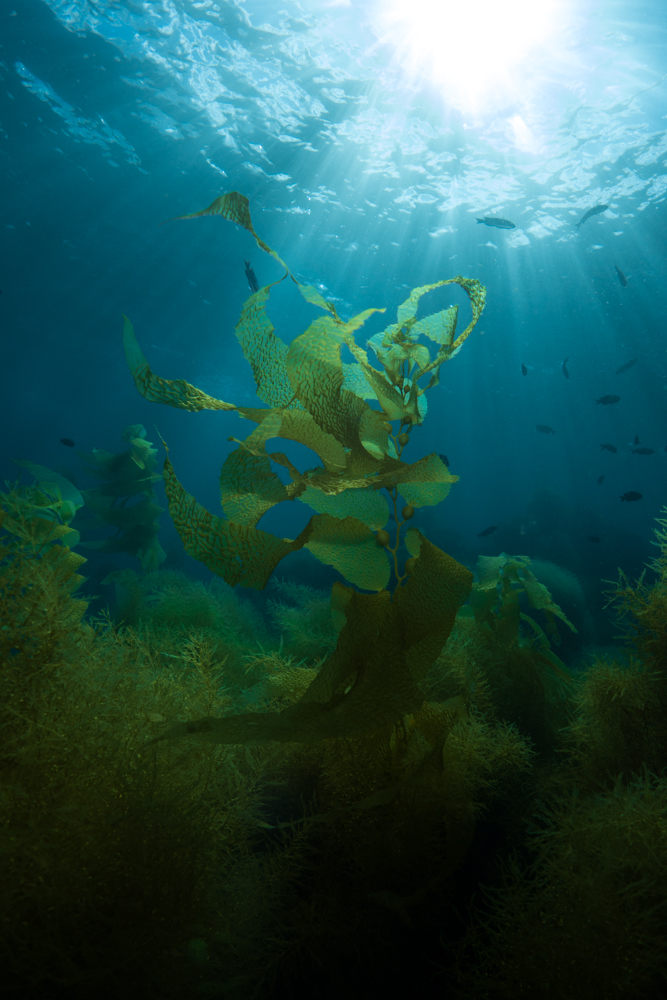 Please Note: This is a printout of the Ocean Safari Scuba | Community | Jackie Quach page from 11/26/2022. Some information may have been updated in the mean time. Please visit PAGE URL to view the latest up-to-date information or call us at 626-287-6283 if you have any questions.