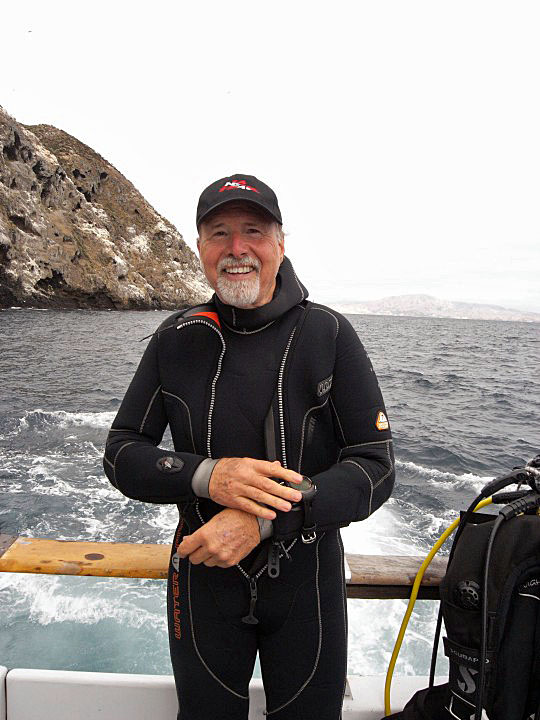 I started diving in 1972 and became an instructor in 1988.  I have logged over 8000 dives and have instructed over 1000 students. I still get excited when first timers exclaim upon surfacing after their first dive "that was incrediblle".  I have dove throughout the world and taught in the Cayman Islands for seven years before discovering Gabe and Ocean Safari some years ago.

In the "other world", I am a Physical Therapist, licensed in California and have been licensed since 1963.  Presently I specialize with knee and hip replacements seeing the patients in their homes after discharge from the hospital following surgery.

My passion lies with diving where I feel in touch with the sea and actually feel more comfortable under water than in our natural environment..

About 10 yrs ago, I had a class of 10 students, a DiveMaster for an assistant and myelf doing our last open water certification dive.  The group was very cool and very good...3 of which were my son, son-in law and daughter-in-law.  As we descended on Big Fisherman's Cove on the front side of Catalina, I noted a sleeping nurse shark on the sand below the group at about 45ft.  He was pretty large and definitely the grandfather of the area at about 7ft in length. I wanted to give my kids something to remember and  told the DM by signs to watch the group while I was going to play rodeo.  He tried to tell me in every way possible that this was not a good idea.

I descended on the back of the shark, placed my fins around him under his belly-the fins could not reach each other as he had some girth to him...placed my hands as best as I could around him and hung on.  Not a good idea. The DM said later that the students including my kids suddenly found kelp, rocks or anything they could hide under and watched.

The shark did 360s around and around. I saw water, sand and rocks, water, rocks, etc. and heard my tank and first stage hitting rock after rock. I bailed at around 5 seconds, curled into a ball and waited for the bite. The DM said he took off like a torpedo looking to tell his family about this strange black creature that attacked him.

DON'T DO THIS. Not a good idea.  And yes, I still consider myself to be an excellent intructor.  I now film starks..not ride them.

Diving on the USS Saratoga at 200ft

Several years ago, I had the opportunity to dive Bikini Atol in the western pacific, the most remote area on earth.  This was where in 1954 the US Government set off 2 atomic bombs, one 100 ft above the water in the lagoon and one 100 ft under the water. Not knowing what atomic bombs would do to loaded ships, they had 70 ships on the surface of the lagoon when the two blasts went off, 2 weeks apart.  The Saratoga, an aircraft carrier with planes in it's holds, sank when the water under the ship vaporized (it was sunk with the bomb that was placed under the water) and the carrier went straight down on it's keel with minimal damage. The lagoon ranges from 180-200ft.

We dove 2 dives a day for 6 days at 180-200ft. We were in the water a total of 6 hrs a day and a 3 hr surface interval.  We had to dive with computers that you could reset to an optional gas under water as we spent about 40-45min at 200ft, then took our time decompressing-3 min at 70ft- until we reached the hang bar under the dive boat at 30ft. There hung 10 regs for the 10 divers and we would switch to the new regs which were 87% nitrox and re-program our computers. The hang bar consisted of 3 bars-10 min at 30ft, 5 min at 20ft and unlimited time at 10ft until our computers cleared which was around 1 1/2 to 2 hrs. The wreck diving was incredible..aircraft carrier, battleships, subs with loaded torpedos in the tubes, etc.

In the hangar bay there were planes with the wings folded and of course, pitch black. I was filming video and had the camera on the planes on my left as I swam though the deck. Because I was swimming blind, I hit a propeller on my right which sliced into my scalp.  I was so excited, I never felt pain and continued my filming and dive.  When we all got together at the first bar at 30ft, I noted a VERY LARGE lemon shark about 12ft in length and as wide as a car circling the group.  When one diver at a time followed by the whole group suddenly pointed at me and I reached up and felt my head, I knew why the shark was circling me..for dinner.  The other 9 suddenly kicked me out of the group and I had to decompress by myself for another 2 hrs constantly placing the shark in front of me as I circled around and around with the camera between this incredible animal and myself.

This was our first dive and for the rest of the week, I was no longer Stu...but called Shark Bait.

Please Note: This is a printout of the Ocean Safari Scuba | Community | Stu Roy page from 09/27/2022. Some information may have been updated in the mean time. Please visit PAGE URL to view the latest up-to-date information or call us at 626-287-6283 if you have any questions.