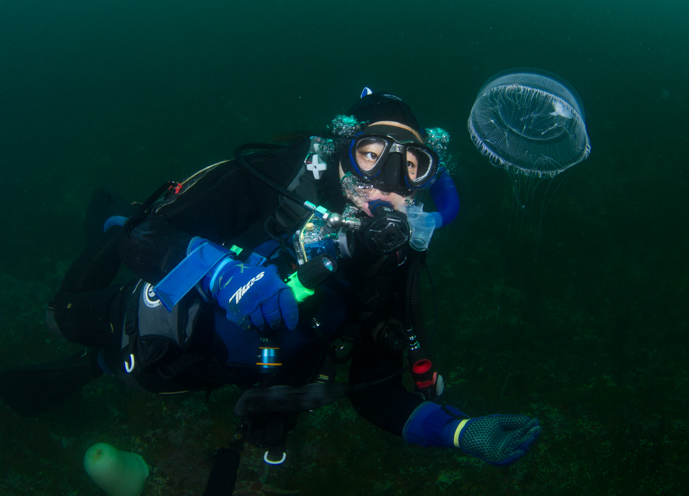 Location: Somewhere in nature
Hometown: Forests and under the sea

Nature is indescribably amazing. No matter how hard humans try to come out on top, nature's rules stay consistent within all living organisms. Even the spiraling pattern of our DNA is based on the same proportions that spiral sea shells and arrange the petals on a rose. No matter how hard we try to separate ourselves and try to "tame the wild", nature always wins. My passion is to show everyone this beauty and renew the wildness that's within all of us.

I'll guide you underwater and open your eyes to the creatures often overlooked. I'll give you health and beauty tips using algae, and make you delicious seaweed cocktails. I'll lead you into the mountains to forage for wild foods and make seasonal drinks! Come out and explore with me!

"From birth, man carries the weight of gravity on his shoulders. He is bolted to the earth. But man has only to sink beneath the surface and he is free" - Jaques Cousteau 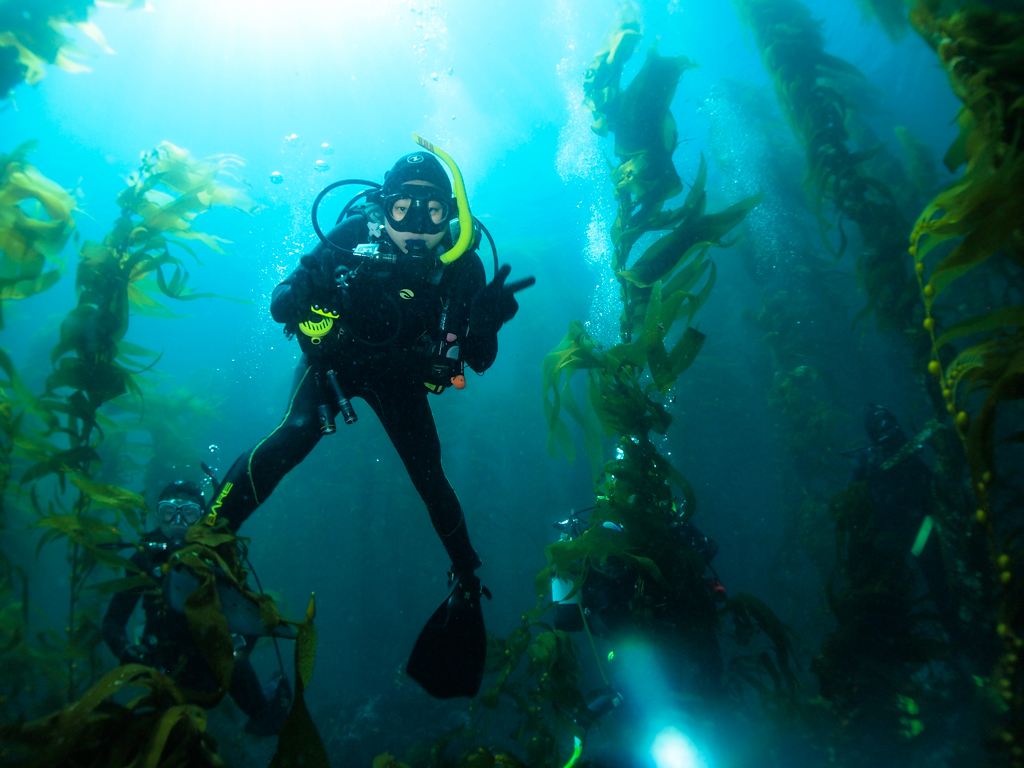 We were all wondering if we would make it to Santa Barbara Island. Personally, it's my favorite Channel Island, and the last time I tried going out there, the seas were too unrelenting to get there. Santa Barbara Island is a tiny island in the open ocean, so there's very little protection around from wind, current, and swells. Unless the ocean conditions are willing, we won't be able to get there. The week before the trip, there were some rain storms, swells, and weather unlikely to be conducive to a nice day at the tiny island. I wasn't too sure we'd make it.

But guess what! We had an amazing day at SBI, and despite being May, when it's usually green cold water in California, the water was 58-62°F with great 40+ feet visibility! The seas were pretty calm too, but actually, this might be an illusion that the masterful Peace crew made us see. You see, the swells were there, as well as the current, wind and weather. But Captain Steven was able to plan our dive day so that we were diving the best conditions around the island running ahead of the weather, and left the island before the conditions became too unfavorable. Captain Steven and Chartermaster Thomas chose the three dive sites in the perfect order so that divers can enjoy the best Santa Barbara had to offer that day. You see, if we did the same dive sites in a different order that day, divers would've likely been all seasick, fighting strong current, or otherwise had a miserable time. This is why we love the Peace Dive Boat so much and respect their knowledge and experience in California waters.

Santa Barbara Island is full of diversity. There's probably a hundred different species of algae here that is one of the bases of the diverse marine life present. I saw more than a handful (6? 7?) different species of nudibranchs, even a rare black dorid and Limbaugh's dorid. There's lots of color -- pinks and purples of different species of coralline algae, orange cup corals, red and golden gorgonian sea fans, red, purple, pink, orange strawberry anemones, iridescent red algae (Fauchea laciniata), and bright blue/purple & orange Spanish Shawls speckled throughout the green towering kelp forest. There's still lots of healthy giant kelp at the sites we visited, while they're disappearing again from most of the Channel Islands (most likely due to the recent El Niño we've had/been having -- meaning higher water temperatures in the Pacific Ocean).

We had a diverse group of divers on our trip, from photographers to hunters to freedivers, and those who've been diving since the 1960s to those who jumped into their first ocean dive that day. We had a basic scuba diver class, an advanced class, a rescue class, and a master class. The beauty of Ocean Safari trips is that everyone from various dive experiences and backgrounds can come and thoroughly enjoy their dive day. Just because there are students doesn't mean that we go to baby beginner sites. Just because there are hunters doesn't mean that we won't go to a pristine Marine Protected Site. Each dive site will have something for everyone, and you'll see below that this was the theme of the trip.

Dive #1 Everyone loves Webster Point, there's so many cool directions to dive there -- depending on what you like to do on a dive. Wanna see an awesome wall?

What about the plateau on top of the wall?

Swim through kelp forests on the rocky reef?

Do you focus on macro photography? Wide angle? Spearfishing?

This site has something for everyone. To top it off, sea lions were playing throughout the dive site.

Dive #2, we went to Sutil Island, at a site called the Notch on the east side. This spot also has areas for everyone to love exploring -- a vast area with kelp and rocky reef that's abundant with life, as well as the looming crevice with white water crashing into the notch for the experienced adventures.

Dive #3 was at Cat Canyon. This one featured a dramatic drop off at the end of the reef, a cool swim through if you know where to look, and a plateau bed of kelp with bowls of sand and reef if it's your first trip and want to feel more protected and safe. There were sea lions dive bombing all around the divers, and since this location is a Marine Protected Area, there were huge calico bass, giant male sheephead as long as my torso, and schools of blacksmith and señoritas. Everyone soaked in the awe-inspiring seascape with the clearest visibility of the day, and had a wonderful dive. You could tell because at the end of the dive, everyone was gathered by the boat blowing bubble rings, playing with sea lions, and taking photos of each other goofing around.

All in all, I'm pretty sure everyone had a great day at Santa Barbara Island. I'm glad I got to show my students around my favorite island. We even saw a finback whale and a pod of dolphins on our way home! I'm so grateful for the Peace crew, whose mastery of the California waters allowed us to have such an awesome day here. We even heard that a different dive boat "didn't dare" to go to Santa Barbara that day because dive conditions wouldn't be favorable. But the Peace crew showed us how it should be done!

Please Note: This is a printout of the Ocean Safari Scuba | Community | Haruka Ito | 5/11 Santa Barbara Island page from 08/12/2022. Some information may have been updated in the mean time. Please visit PAGE URL to view the latest up-to-date information or call us at 626-287-6283 if you have any questions.